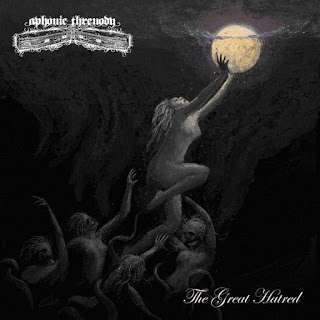 A few years ago I did a review for another band from this label called TOWARDS ATLANTIS LIGHTS. They were a pretty heavy handed funeral doom band which features members from various other acts from other nations. One of their members was guitarist /bassist Riccardo Veronese from England. So here we have Veronese's other band, although he's in a few more.

APHONIC THRENODY is another international band featuring (along with Veronese) Juan Esteban Escobar from Chile on keyboards and American Justin Buller on guitars. Both of whom are in bands I've never heard of, yeah my loss right. But anyways The Great Hatred, which is their third full length, does not stray too far from what Veronese was doing with TOWARDS ATLANTIS LIGHTS.

This album is what I'd call the epitome of funeral doom or if you prefer, atmospheric death doom. Genre taglines a side if you like MY DYING BRIDE then this is right up your alley. You've got your heavy riffs paired with guitar lead melodies which carry you along. The vocals are a mix of depressive growls or screams of a bear in torment. Then there's the whispered clean singing runs which are used slightly and effectively. I like how on some songs the bass and piano work so well together and complimenting each other.

For me it's the soaring melodies aligned with the claustrophobic atmosphere of their sound which keeps me interested in this slightly less than an hour long release. There's six mostly long cuts. Of those surprisingly I think the ones over ten minutes in length are the most captivating and yeah not boring or repetitive. I'm talking about the menacing and so reminiscent of MDB "The Rise of the Phoenix", the solemn "Interrogation" as well as the awesome "Drowning". On the whole this is sweet elegance with roses as opposed to a dirty field with a empty grave awaiting an occupant.